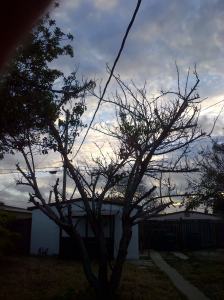 Photo by Mark A Y Nunez
I left my sister’s house on my bicycle after dark on Wednesday and arrived at my parent’s house around nine at night. My parent’s house is being sold and is mainly vacant except for a few of my things. Some of my family members still have some things in the garage. Most of my possessions are in the garage. The garage is detached from the house and faces out on the alley. I had been staying overnight at my parents house but had been staying away for a few days because the real estate agent who is, also, the buyer would be coming through with appraisers. I saw the wooden gate on the side of the house was slightly open but that happens because it doesn’t latch well and there is always wind. When I went into the back yard and looked at the garage door it was open!I went into the garage and saw that a large speaker for my professional music amplification system was missing. The microphone case with my best microphone had been moved. I opened it and the microphone was missing. Strangely my best acoustic guitar was there. I went and saw that the big wooden gates for the driveway at the side of the garage were closed but the wooden board that secured it to keep the wind from blowing it open was set off to the side. Whoever had entered the garage had pushed the door with such force that the bolts had broken through the wood of the doorway.

I called my sister to tell her and was asking her if she thought I should call the police. I decided to call the police and report it because I felt that if people saw that the police came the people who were responsible would be less likely to come back. Others who might think of breaking in would, also, stay away. When I went to call the police I was standing in front of the big, wooden gates of the driveway next to the garage. I heard a voice saying, “Excuse me”. It was a neighbor man with his wife. They were saying they saw people in our yard and that they had a break in on Sunday with things stolen from them. They said they wanted to see in the garage because they knew the house was vacant and they thought the criminals may be storing stolen merchandise in the garage.

In the meantime I was already talking to the police and a police unit was on the way. I opened the gate and let the police talk to the man. He lived a few houses up on the other side of the alley. I introduced myself to the young man and his wife. Their names are Yesinia and Andy. They are Chicanos. The man said he saw six people in the yard. This was at 5:30. When he saw them coming out carrying the speaker he said to them, “I see you!” and they dropped the speaker. He said the police had taken the speaker. He handed me my lost microphone. Apparently they had dropped it on the ground.

A black policeman came in a big SUV truck. He took the report after we all went into the garage. When I told him that the neighbors had been burglarized on Sunday he asked them if they had reported it. They said, “No”. He asked if they wanted to report it now. They said, “Yes”. They said they had a bicycle and two TVs stolen. The neighbors said five of the people had been arrested but one had gotten away. The policeman asked the neighbors to describe them. They said they were all tall and medium build and they were all Hispanic. They described their clothes including a Raiders hat. They said they were around twenty except that two were teenagers around 16 and 17. They said the one that got away had a full beard and was scruffy looking. Yesenia said he always hangs out on E street and she knows where he lives on F street. The couple said they got a good look at all the guys and they know who they are.

The policeman asked them to describe the police officer who took my speaker. They said he was a white guy and he was tall and slim. The police officer came with my speaker. I asked if he needed it for evidence and he said no, I could have it. The first police officer went off to talk more with the couple. The second police officer offered to help me secure the door to the garage for the night. He explained that some of the hardware is ornamental and has small screws. He found longer screws in the garage to secure the metal to hold the bolt in place. He said that would make it impossible for someone to push on the door and break the wood. The piece of metal didn’t line up right so he asked if he could remove the molding to put the metal piece on the side of the doorway. This temporary fix worked.

Since then I have fixed the door and replaced the molding around the door. I have tested the speaker and microphone and they work. I thought the microphone clip to clip the microphone to a microphone stand was missing but I found it with one of my other microphones. I called and left a message with the policeman who took the report saying there are fingerprints on the little glass window on the door. I noticed a hand print on the door when the officers were there but the texture of the door wouldn’t allow for fingerprints.

I haven’t heard anything from the police officers but I assume they will get the gang members to plead guilty to a lesser charge to avoid a court case. It is more likely I might be called in as a witness to the previous burglary on Sunday with my neighbors if they can find proof that it is the same people responsible. I was very lucky that my neighbors were looking out for the burglars and stopped them when they did. This is not a good thing to happen in the middle of selling a house. Now I am spending every night at the house. My sister can’t complain that I am wasting electricity by leaving the outside light on that is on the garage next to the alley or the back patio light.